INDICATIONS FOR THE BACH FLOWER REMEDIES

FOR OVER-CONCERN FOR THE WELFARE OF LOVED ONES – they impose their opinion, in order to shape this world and people around them, they suggest, persuade, control or abuse others

FOR FEAR, FOR THOSE WHO SUFFER FROM ANXIETY

FOR DOUBT, FOR THOSE WHO SUFFER FROM LOW SELF-ESTEEM

FOR INSUFFICIENT INTEREST IN GIVEN CIRCUMSTANCES

FOR HYPERSENSITIVITY TO INFLUENCES AND IDEAS OF OTHERS

FOR DEJECTION OR DESPAIR 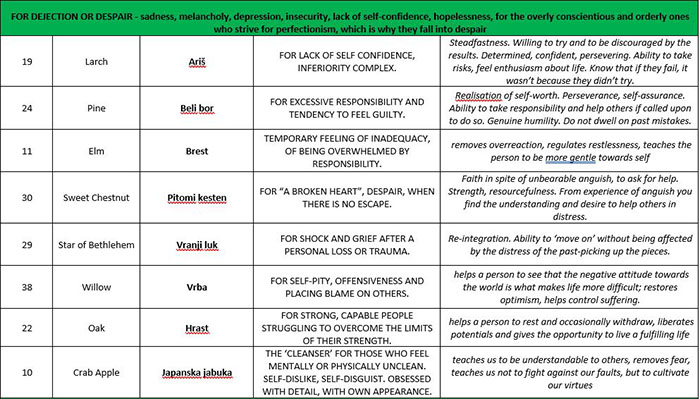 WHAT ARE CHAKRAS AND HOW DO THEY WORK 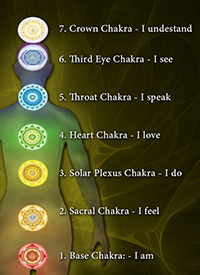 The word “chakra” in Sanskrit literally means “wheel”. There are seven main chakras and they are located along the spine extending out the front and back of the body. Each chakra has a number of specific qualities that correspond to the refinement of energy from the base-level material-self identity, located at the first chakras, up to the higher vibration spirit-level awareness of being at our crown. Each center has an integral function in creating our energetic balance. It is through the study of our energetic and physical being that we can create health, emotional stability and spiritual bliss.

The Root Chakra –the color associated with the root chakra is red. Most red, black and brown stones have an affinity with the earth and are already widely used as grounding stones, such as the ruby stone, agate, hematite, onyx, black tourmaline, red jasper, red calcite, etc. The root chakra keeps us grounded and is our connection point to the earth.


The Sacral Chakra corresponds primarily to the color orange. This is the chakra for relationships, and it relates to your emotions and to sensuality, intimacy and sexuality. Sacral Chakra reminds us to bring more joy, play and pleasure into our lives by simplifying our existence instead of getting caught up in the complexity of life. Here are a few of Sacral Chakra crystals suitable for healing purposes: moonstone, sunstone, golden yellow topaz, tiger’s eye, amber, citrine, etc. Its element is water and as such, its energy is characterized by flow and flexibility.

The Solar Plexus Chakra - is connected with the color yellow and is associated with personal power, self-confidence, responsibility and will power. Improving energy flow to the solar plexus may clear problems that have been producing lack and limitations. It is also a powerful area to bring an improvement in your finances, as its energy aids you to manifest money. The solar plexus chakra stones are tiger’s eye, pyrite, malachite, citrine, orange calcite, yellow agate, yellow tourmaline and amber. The Solar Plexus Chakra is traditionally related to the element of fire, though some contemporary healing movements connect it to the element of air. It has connection with the sun, the energy of light, and all forms of power.

The Heart Chakra – Green is the main heart chakra color. It is the color of healing, balance, tranquility, and serenity. Green brings wholeness to our lives and it is the color most frequently found in nature. Heart chakra healing stones are emerald, green and pink tourmaline, malachite, green jade, green aventurine, rosequartz. The fourth chakra is related to the element of air. As such, its energy is associated to the breath and its movements, as well as the idea of spaciousness and connection with all things.

The Throat Chakra – is is the fifth chakra and its color is blue. It is one the three primary colors. The main energy of blue is communication and it is the color used to soothe the soul. The Throat chakra is about the expression of yourself: Your truth, purpose in life, creativity. Here is a brief list of common healing crystals and chakra stones for throat chakra healing: amazonite, lapis lazuli, turquoise, and aquamarine. The element of the throat chakra is ether, otherwise known as spirit in the Sanskrit language. The ether element represents a world of vibrations, and is the universal element called space.

The Third Eye Chakra - is located in the center of the forehead, between the eyebrows. This is the chakra that is connected to our intuition and inner guidance, as well as opening the psychic senses. Stones associated with the third eye chakra are usually blue in color, tending towards a darker blue or indigo, although some stones of purple also work well with this chakra. Stones that are related to the throat chakra are lapis lazuli, sodalite, amethyst, blue sapphire, blue tourmaline, opal. On mental and emotional levels, the throat chakra is linked to our higher mind. Intuition, a sixth sense, extra sensory perception (ESP), telepathy, spiritual vision and insight are all related to the third eye chakra. So are wisdom, the intellect and understanding.

Crown chakra - is most commonly represented with the color white, although it can also be depicted as deep purple. The auric color of crown chakra energy can also be seen as gold, white, or clear light. The Crown chakra is primarily associated to the pituitary gland, and secondarily to the pineal and the hypothalamus. The hypothalamus and pituitary gland work in pair to regulate the endocrine system. Because of its location, the crown chakra is closely associated with the brain and the whole nervous system. Here are a few healing stones frequently used to open, balance and heal the Crown chakra: selenite, clear quartz, amethyst, diamond. The element of this Chakra is Thought. Here is where we hold the “Right to Know”. The main issues is Understanding, and the goal is Expanded Consciousness.

WHAT ARE HISTAMINS AND WHAT CAUSES HISTAMINE INTOLERANCE

When we mention histamine, the first word that comes to mind is allergy - however, is it always so and what are all its functions?

Histamine is an amine (an organic nitrogen compound) produced by the immune system cells (mast cells, basophils and eosinophils) involved in the inflammatory immune response to an injury or foreign compounds.


The normal inflammatory response is a healing mechanism that increases the permeability of capillaries (small blood vessels) to white blood cells so they can combat the pathogens or toxins present. Histamine is also a neurotransmitter in the central nervous system (i.e. it relays messages between cells) where it is involved in many brain functions such as arousal, pituitary hormone secretion, suppression of eating and cognitive functions. So we very much need histamine for the body to function well on many levels.

The highest concentrations of histamine in the body are found in the tissues most exposed to the outside world such as the skin, mouth, sinuses, digestive tract and the lungs. Histamine is also released in the body as part of an allergic reaction, causing the typical ‘itching, sneezing, wheezing, swelling’ allergy symptoms.

Enzyme diamine oxidase (DAO) breaks down histamine and maintains a histamine balance in the body. However, some people have a low level of this enzyme, and when they eat too many histamine-rich foods, they may suffer ‘allergy-like’ symptoms such as hives, headaches, rashes, itching, diarrhoea and vomiting or abdominal pain.

As mentioned above, histamine is not only produced in the body but is also occurs naturally in many common foods. Microbial fermentation in the food converts the amino acid histidine present in high-protein foods to histamine. As such, histamine content of food increases over time as the food ages.

Histidine is also produced by some of the species of bacteria found in the gut. If they proliferate too much due to the gut flora imbalances (also known as gut dysbiosis or SIBO – small intestine bacterial overgrowth) they produce too much histamine and the symptoms appear.

This is one of the reasons why histamine intolerance is on the rise as an effect of alterations to our microbiota (gut flora) over the past 20 years or so, due to the changes to our diet including a significant increase in processed and packaged foods that are stored for a long time, use of additives and preservatives as well as pesticides and chemicals.

Therefore, an integrative approach to health in contemporary medicine is essential, which involves paying attention to the positive experience of traditional methods which perceive the organism holistically, that is, as the harmony between mind, body and emotions.

Our Services
Suplementi i preparati
Copyrights ©2017: /All rights reserved/